Happy Wednesday, everyone! I know I said I wouldn't be blogging for a while, but I had a cup of tea that made me feel kind of peppy, and I'm between loads of laundry, so here I am!  Sometimes I just need a creative outlet.

It's the 19th of December which means we have just 6 days left before Christmas.  Are you excited?  Are you ready?  Are you pulling out your hair yet?  Over the years, I've crafted a plan of slowly building up to Christmas by making gifts and writing lists and generally planning far in advance, so that by the time mid-December gets here, I'm all set for the big day.  I highly recommend this path for everyone who finds themselves frantic this time of year.  It's much less stressful, but requires more planning of course.  Which I understand for some people is half the effort!

Chad and I started baking around Thanksgiving, one or two recipes a weekend.  We managed to get four kinds of quick bread made to give away as presents (gingerbread, orange nut bread, chocolate tea bread, and banana bread), plus three kinds of cookies so far (pepparkakor, spritz, and cinnamon bun cookies).  We have one more baking weekend to go!  We're doing my grandma's sugar cookies, and we're making a pumpkin roll too.  Have you ever had pumpkin roll?  It's a bit of work, but oh goodness, so good!  For me, it's very nostalgic.  The older ladies in my family would make up several pumpkin rolls and give them away for Christmas.  They're a spicy pumpkin sponge cake smeared with what is essentially cream cheese frosting, and then rolled up into log form and chilled until firm.  Then you slice it and eat a small piece of heaven.

We decided to cut back on Christmas gifts this year for several reasons.  I'm not really sure which of these reasons are first or most important, honestly.  One reason is because this year we started seriously saving money, for our future country home.  We set aside $600 for Christmas every year, which is actually less than the American average (which is $800), but I felt like we could spend less than that.  Which  brings us to our second reason, which is that spending so much money on Christmas gifts ends up feeling hollow to me.  I don't want Christmas to be about commercialism and consumerism.  I don't want to try to prove my love of someone by buying them stuff.  I want Christmas to be about family, tradition, and spiritual celebrations.  We're trying to cut down on our daily consumption of commercial goods, so it only makes sense to do that at Christmas.

By talking to my family about my ideas and by carefully planning homemade gifts, we were able to cut our Christmas spending down to around $250 for 13 people.  STILL.... even though we spent very little and got very few gifts this year, THIS is what our Christmas tree looks like: (I realize that was a long story for one picture, but I didn't want you to think that we spent a ton of money when we didn't!)

The bulk of the presents under the tree are canned goods; I made tons of jelly and pickles to gift this year, plus I canned a half a bushel of apples in the form of apple sauce for my dad.  Yay canning!

For comparison, here's what the tree looked like last year.  Yes, I do take this picture every year. 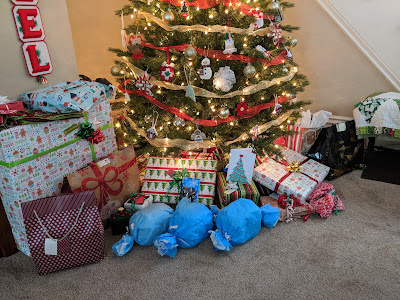 The blue packages are homemade bread, which hasn't showed up under the tree yet this year, but it will be there!

So I have some other things going on other than Christmas this week.  Between loads of laundry, I'm working on my hexie quilt.  This is taking so long to complete!  But it's getting there, slowly but surely. 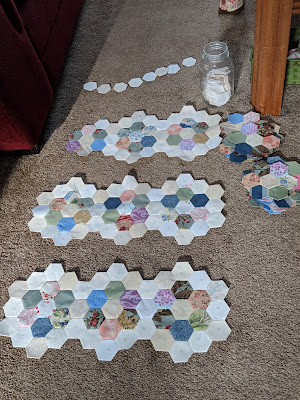 I'm working on it in sections so that it feels like less work.  Eventially, it's going to be this size: 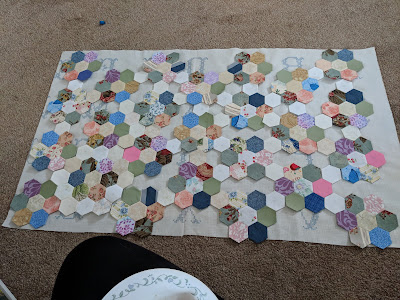 That's the backing for it behind it.  I'm going to turn it into a cover for one of my sewing machines.  Next time I make a hexie quilt, I'm going to do half hexies and sew them on the machine :P  This is tedious work!

I'm starting to get that itch that I get this time of year...  no, not eczema (which actually I do have right now, but never mind that).  I mean I'm starting to get the desire to start organizing!  That lovely urge to sort my life into neat little boxes.  I'm probably feeling that way because my crafting spaces look like this at the moment. 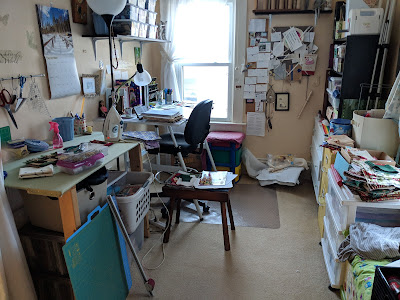 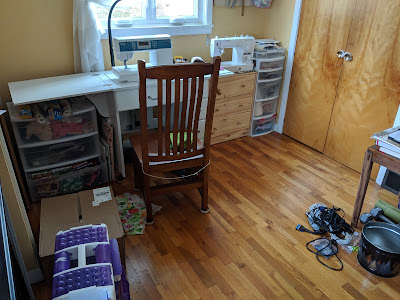 Yikes.  My studio (the top picture) is especially bad right now.  I've probably done 10 projects without fully putting all of the supplies away!  Once Christmas is over, I'm going to dive into that mess.

Chad and I went to a cool indoor flea market last weekend, on a futile search for a cassette player.  Do you know how hard those are to come by these days?  I thought flea markets and thrift shops would be overflowing with them, but nope, not a one.  Well, there was one massive one from the 80s, but I want something a tad smaller than an economy car.

I may not have found what I was looking for, but that doesn't mean I didn't find something worth getting.  I love looking at cool junk from yesteryear, and that place has so much of it.  I usually start feeling cross eyed before I get through the whole store.  My favorite things to hunt down are copper jello molds (I have quite the collection), and mid-century recipe books.  I only found one ugly looking rooster copper mold, which I left behind, but I came out with these: 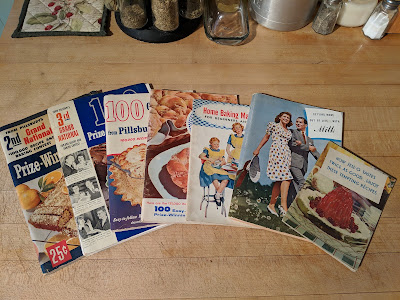 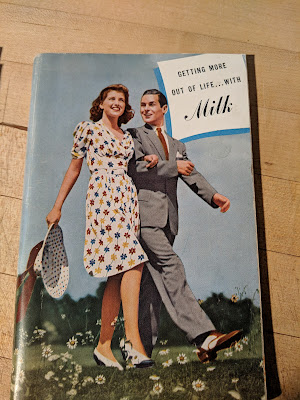 I think my favorite is the Spry book, though.  Mmmm-mmm, partially hydrogenated cotton seed oil... 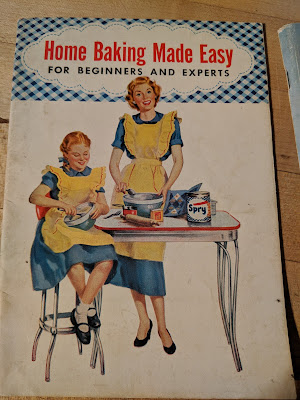 I don't use vegetable shortening at all, but I love how quirky this book is anyway.  I also got four new additions to my collection of Pillsbury bake-off books.  It's an odd collection, and I already have probably hundreds of books, but at least it's a small and easy to store collection!  (And unlike my sewing machine collection, I don't get any worried looks from Chad when I pick up a new cook book.)

On the request of a fan, I have been working on an addition to my seasonal jar patterns.  She asked if I would make any more seasons like my Fall Jar pattern: 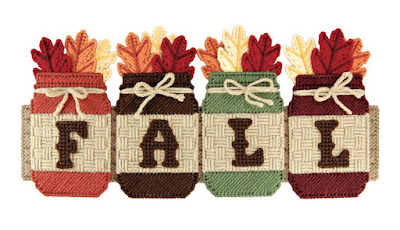 It's a very popular pattern in my shop, so I decided that yes, I would continue making the rest of the seasons.  I have the winter jars all stitched, and now I'm just working on the pattern.  Here's a sneak peak! 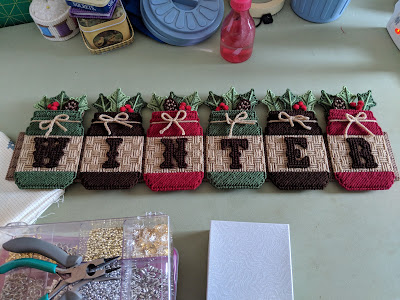 She also asked if I would make the alphabet available, which I probably will do as well.  Keep your eyes peeled for these patterns to show up in the future!

And on closing, I want to wish you all a Merry Christmas and Happy New Year.  And so does my mom's cat, Maui. 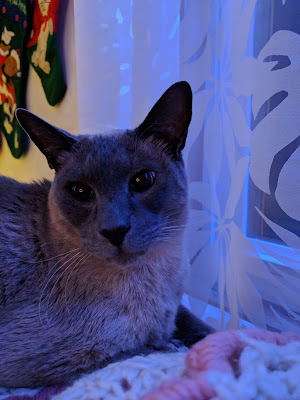