Happy Tuesday, everyone!  Boy, it's so pretty out today here.  A soft snow fell last night, covering up the yucky muddy yard, and the sun is shining so nicely.  The sky is blue and lovely with just a few puffy clouds floating in the sky.  If it wasn't also 15 degrees, I'd really love being outside!  This is why I swear I'm going to have a sun room in my next house.  I want to at least be able to pretend I'm outside in the winter.

Well, it's Tuesday again, and I'm here with another cool trick for you all!  Today's trick is a sewing trick, and I'll admit it's not going to be something everyone will need to know, but I hope it can help someone.

As you may already know, I have a very large sewing machine family. 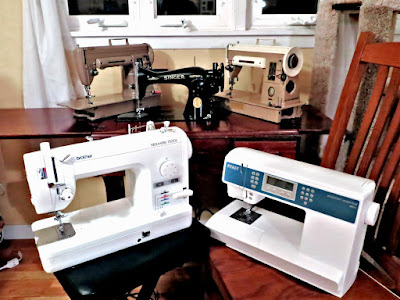 I can't exactly explain why I have such a big family.  I mean yes, I can give explanations but they're really just excuses.  The truth is that I love sewing machines!  I literally look at vintage sewing machines on Ebay for fun, no joke.  I'm actually considering buying a couple more for my collection.  I may have a problem.

I don't just collect them for fun, though.  I actually use my sewing machines, believe it or not.  Well, the Singer 301 is living over at my mom's house, so actually she uses that one, but I use the other four.  I just love to sew!  Plastic canvas designing is something I love doing as a job, but sewing is a passion of my heart.  You can tell the state of my heart by asking how long it's been since I've last sewn anything.  If it's been a while, I'm probably in a good funk.

So as the owner and user of so many sewing machines, and also the owner of a rather small crafting area, I have to think about my use of space wisely.  I dream about having a huge crafting room someday, that's bright and cheery, with big long counters and built in cabinets and shelves, where every sewing machine has its own designated space so I can just go and work at it whenever I feel like it.  But for now, I work with what I have.

And what I have is kind of small.  Now admittedly, it's probably more than most people have, but it's smaller than my ambitions (which, as I just said, is a huge crafting room with lots of shelves and counters and such).  What I have is a tiny 8x10 crafting room and a couple spare corners to put my sewing tables.  Here's what my more frequently used sewing table looks like. 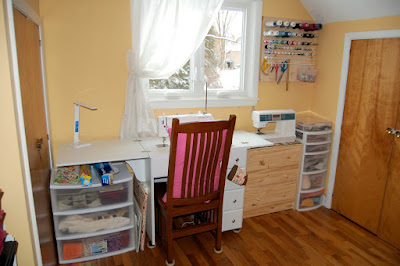 Ok, so it's more of a wall than it is a corner.  Here it is without the chair blocking the view. 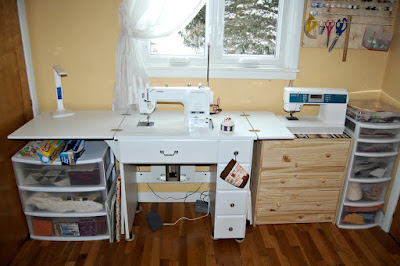 And here's another view. 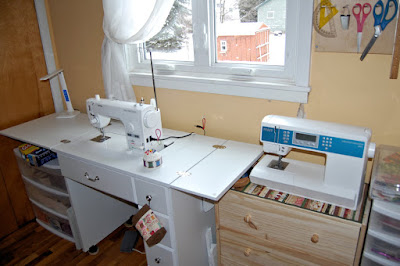 The cool white cabinet is relatively new.  I bought it last winter to house my modern machines.  It's got a hydraulic lift in it, so I can lift the sewing machine all the way up to be sitting on top of the table, push it down a little so the bed of the machine is level with the table top (like it is in the pictures), or push it all the way inside the cabinet and fold the two side pieces in on top so it looks just like a desk.  The current set up is perfect for quilting, because the long table surface gives me lots of space to move pieces around.

However, sometimes I need to change up my machines and use the Pfaff instead of the Brother.  The Brother is great, but it's a straight stitch machine, which means it only does straight stitches.  If I'm working on clothing or something that needs anything other than a straight stitch, I need to switch them out.  That's where my tip finally comes it!


I have a power outlet right behind my sewing machine cabinet, and it's fairly close to the wall so I can still open the closet doors on either side of it.  So reaching down to grab the cords every time I switch machines would be a horrible pain in my butt.  I used to do that, actually.  Or rather, I would try to hold onto the cords or put something heavy on them, but they would always fall down behind and I'd have to reach down.  Ugh!  I wanted to pull out my hair.  So when I did my yearly reorganizing, I decided to tackle this problem.

It turned out to be really cheap and easy to fix, too!  First of all, it helps to know that modern sewing machines have a standard power cord.  You should be able to use any cord with any machine, as long as they're both fairly new.  However, you will most likely need to use separate foot pedals.  I tried to use just one foot pedal for my two machines, and I thought it should be ok because they use the same plug and everything, but it just didn't work.

So knowing these things, I set up a simple system.  I have one power cord plugged into the outlet, and I have both foot pedals under the cabinet.  When I switch machines, I move one foot pedal out of the way and replace it with the other one, and then I plug the same power cord into the new machine.  And here's the trick to making it all so much easier! 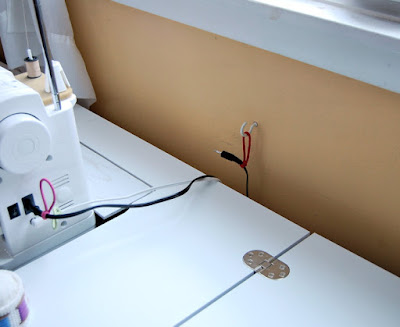 Stupidly simple.  I bought a large cup hook at Walmart for about $1 and screwed it into the wall right next to the machine.  Then I took three hair ties and attached them to each cord.  I'm not exactly sure what you'd call that, but the best I can think of is a slip knot.  It stays on the cord securely, but I can take it off whenever I want. 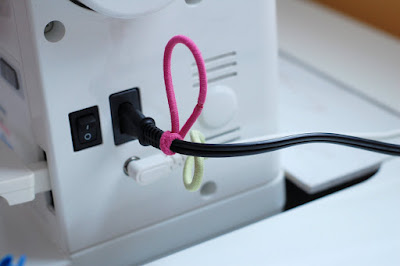 When I need to switch machines, I unplug both cords and hang them on the hook so I don't lose them.  Then I move the machines around and plug everything back in!  Super easy and no reaching down the back of the sewing machine cabinet!  Yay!

So that's my tip for the week, and you got a good ramble about sewing machines as a bonus!  I guess I'm in a really sewing kind of mood lately, so you'll probably be hearing more about them in the future.  Do you guys have any good tips for organizing your sewing room or your sewing machines?  I'd love to hear them!
Posted by Julie D at 12:26 PM