Happy Wednesday, everyone!  Oy, another laundry day for me!  I guess I shouldn't gripe too much; at least it's only two people in my house so it only takes me half a day to do the laundry.  I can't imagine what you poor ladies with multiple kids go through!  Oh goodness, I just thought of my poor grandma.  She had 12 kids (yes 12!) and lived on a farm and probably didn't have a modern washing machine until most of her kids were grown up.  Can you imagine washing 14 people's clothes with a ringer washer?  Ugh!

So with that, I'll stop griping and start writing about my week!  After two weeks of total chaos, between my sister having an emergency C-section and my husband getting extremely sick, I'm so ready to get back to normal life.  I want 2018 to be an amazing year, so I've been doing a lot of journaling and reading motivating books, and I set some goals for myself.  My goals are:

I've been doing really well so far this week.  I realize it's only Wednesday, but I feel like I'm really on track!  I got one blog post written, and here I am writing another.  I posted my Swedish Hearts Coasters on my Etsy shop on Monday, and I have another pattern in the works already.  I haven't started looking for new blogs to read yet, but I have a couple in mind to check out.  AND I haven't read any news all week!  That's pretty big, considering I used to be a huge news consumer.  I don't know why because all it did was make me angry.  Maybe I liked being angry?

Along with working on my design business and my blog, I decided I needed to start sewing more frequently.  I love to sew, after all, so why do I do it so infrequently?  It's not like I don't have the time for it.  I'm a stay at home wife/designer, so I can do a little sewing between projects or while dinner cooks.

I decided to start a new quilt to get me off on the right foot.  I bought three Moda scrap bags last fall, which I just love!  They're selvages with about 3 inches of fabric.  So essentially, they're extremely cheap jelly rolls and as a bonus, they have lots of selvages too if you like making selvage quilts (which I do).  I cut as many of the pieces into 2 1/2 strips as I could and decided to try making a strip tube quilt.  My MIL bought a cool ruler and book that explains how to do it, but it's basically this: you sew a bunch a strips together, then sew those into a tube.  Then you use the nifty ruler to cut it into triangles, and when you open it up, it's a neat square.  Then you sew those together to make neat blocks.  I discovered, though, that I already had a half square triangle ruler! 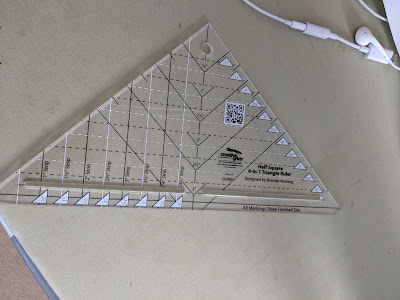 This one is really nice too because it has built in grippy bits and lots of extra lines to help you with your HST blocks.

I decided to do a really simple version of the quilt.  Here's what the blocks look like. 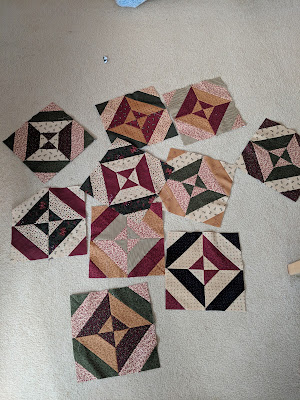 All together, my three bags of scraps made 20 blocks, so it'll be a 40x50 inch quilt when I'm done.  I like using quilts as table cloths, and I think this one will be just perfect for our table. 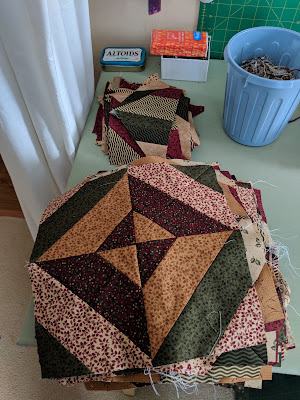 I have just a small pile of blocks to make yet, and then I can start piecing the blocks together!

I decided this was the perfect project to help me get to know my lovely vintage Singer 301A better.  She's such a fun machine! 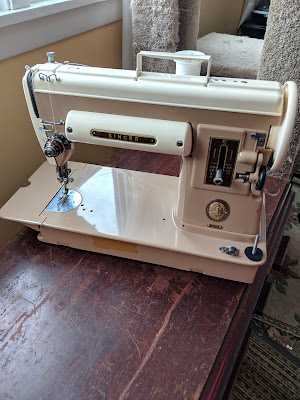 She sews like a dream.  I bought her on Shopgoodwill.com for about $60!  She was pretty dirty and needed a thorough oiling and greasing.  I still have a little work to do before she's up to tip top shape, but even still, she's working like a dream.  Her stitches are so smooth and even, and at full speed, this machine can do 1600 stitches a minute.  By the way, that's on par with my Brother PQ1500S, which cost me $650 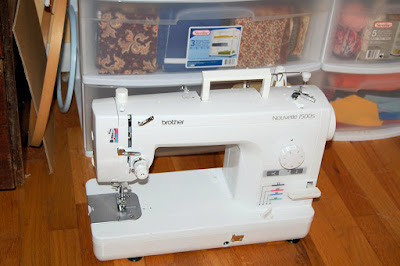 I still prefer the brother for large pieces because it's got a deep throat, but the 301A is nice for piecing.  Plus I found out it's great for dragging around the house!  Its only 16 pounds despite being entirely made of metal, and it has a cool handle.  I had to sew downstairs a lot last week because my husband worked from home while he was sick, and I didn't want to annoy him with my sewing. 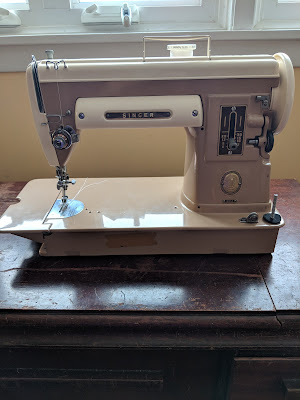 Another cool thing about my little Singer is that, unlike older machines and even a lot of modern machines, it has a 1/4 inch marking built right into the cover plate. 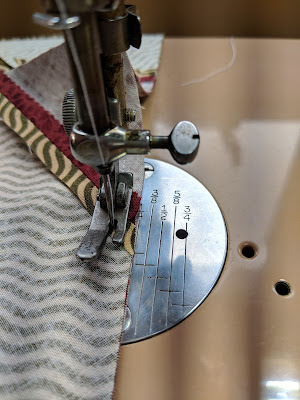 I like using the marking on the machine much better than a 1/4 inch foot, but that's just a personal preference.  I guess I feel like it's easier to see, and also, the line is much longer than a foot would be, so you can keep the piece of fabric on the line a lot further and not swerve off track at the beginning or end of fabric.

I guess that's all for sewing talk today.  The other thing I have to report on this week is that my Aerogarden is starting to really produce a lot of lettuce! 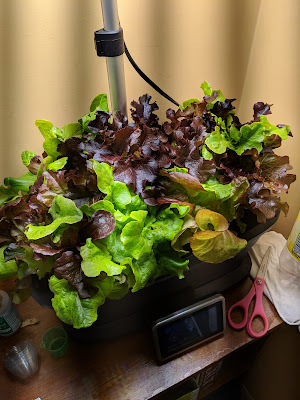 Here's what I harvested yesterday.  I harvested it on Friday, and then by Tuesday it needed to be harvested again, so this is what it grew in just FOUR days! 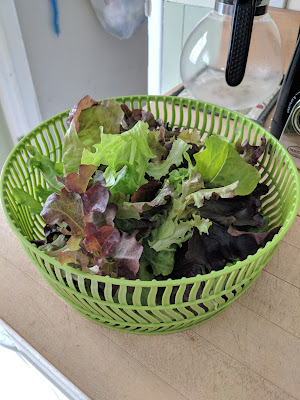 Alright everyone, I'd better go work on my laundry some more.  I hope you're all having a great week so far!
Posted by Julie D at 12:05 PM