Hey everyone!  How are you all doing?  I'm doing pretty good in my neck of the woods.  I'm busy getting ready for our trip to Maine... we leave on Friday!  EEEH!  I'm so excited to get away and do loads of chilaxing.

Have you heard of Wordless Wednesday?  The idea is to post some pictures on your blog every Wednesday, except without words.  Just pictures.  Sounds really cool, right?  Well, I have trouble doing the wordless part.  There's so much to tell about pictures!  You're missing so much of what's going on if it's just a picture.  Or at least that's how I feel.

So I decided to try to do a post on Wednesday to kind of show what's going on with my life and what I'm up to, and I'm going to call it What's Up Wednesday!  So there will be pictures and words, because it's so hard to not have words.  Lol!

What's up in the garden!

Here's part of the reason I haven't been so productive with my patterns lately.  I have a pretty sizable garden out back, with both flowers and vegetables.  No matter how hard I try every year to tone it down so it's not so much work, I just can't help myself.  It gets so big and lush and there's so much going on, because I love plants and I adore being outside with them. 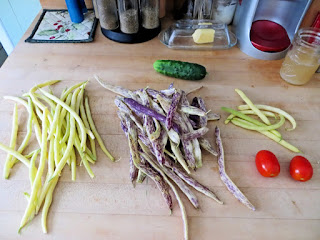 It's bean season right now in my garden.  I just started getting beans in this week! I'm growing four different varieties, and I realize now that I'm not growing a single green bean, lol!  They're all yellow and purple kinds.  I like the colorful ones because they're so much easier to see to pick.  Plus they're interesting! 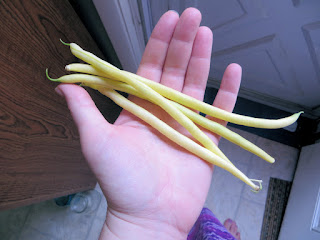 I tried a new variety this year called Monte Gusto!  They're sooo big!  You may not realize it looking at that picture, but look down at your hand and imagine that bean.  It's a good 8 inches long!

What's up in Niagara Falls!

So a couple of long distance friends came to visit earlier in the month, and we decided to go visit Niagara falls, since we live just a couple hours away.  Despite living so close, I had actually never been there before!  I guess that's always how it is though; you forget to look at all the cool stuff in your own area.  We decided to do all the touristy things, so we went on the Maid of the Mist and then visited the Cave of the Winds.  It was pretty cool! 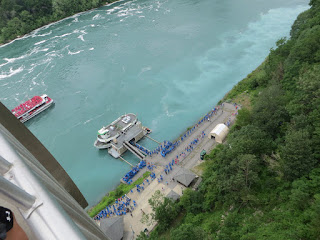 There's a picture of the Maid of the Mist, a cool boat that goes right up to the bottom of the Horseshoe Falls.  I didn't get any pictures on the boat because it was SO WET!  (By the way, the people in the blue ponchos are on the American side, and the other boat with the red ponchos is from the Canadian side!) 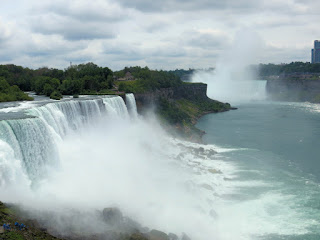 A pretty shot of the American falls and Horseshoe falls in the back. 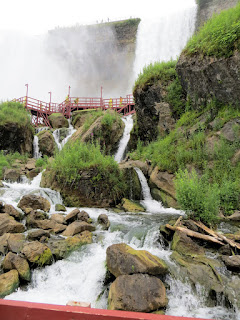 In the Cave of the Winds, you walk down to the base of the American falls.  It's very pretty! 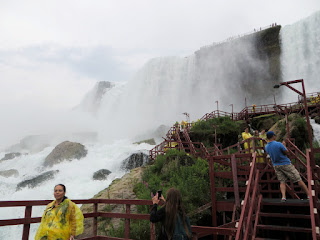 It's also amazingly loud.  There was a point where our friends and I had to start using hand signals because we couldn't even hear ourselves yelling. 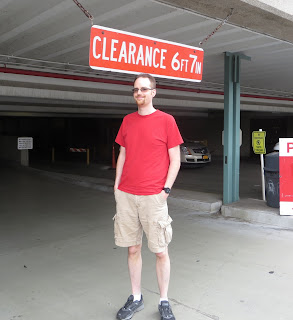 A hilarious picture of my very tall husband that my friend had me take.  He just barely fits!

Well, that's it for this week's What's Up Wednesday!  I'll be gone next week on our Maine vacation, but that means I'll have lots of cool pictures to show you when I get back!
Posted by Julie D at 10:32 AM