This week's Free Friday is part pattern, part tutorial.  In the spirit of getting organized, I decided to tackle my messy embroidery floss collection, and took lots of pictures along the way so that maybe it can help someone else get organized too! 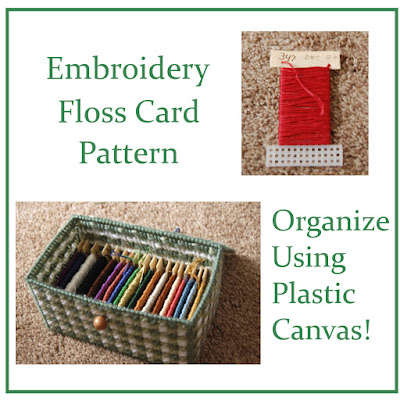 I have a confession to make.  I'm very messy most of the time.  I have a bad habit of not putting my crafting supplies away, or leaving them in a messy bundle to deal with later.  I'm usually too busy thinking about my next project to finish cleaning up from the last one!

However, once or twice a year, I'll get motivated and start putting away my junk and trying to organize so that maybe I won't be so tempted to just leave everything laying around.  After all, I figure, if it's neat and well organized, that should make me want to keep it that way, right?

I'm in the process of getting my craft supplies organized right now, and for some reason, one of the first projects I decided to tackle was my messy collection of embroidery floss.  I don't use embroidery floss very often, but I have intentions to start incorporating it into my plastic canvas designs more in the future, so I figured I'd better get it organized now.  This is how my (admittedly small) collection looked yesterday morning. 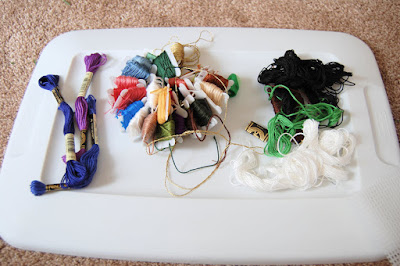 Some still tied up hanks, a couple of scary messy loose balls, and a bunch of badly organized floss on one of those store bought rings and the little, nearly useless plastic store bought cards.  The cards at least keep it somewhat organized, but in my opinion, they're too small and they don't hold the whole hank very well.  Plus, the little slots you're supposed to put the ends into to keep them from unraveling don't always hold the floss, and it ends up creating a mess anyway.

So here is my solution! 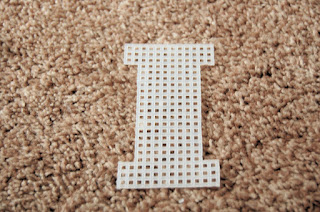 A slightly longer, homemade floss card made out of scrap plastic canvas pieces!  So at least for me, it was totally free (if you don't have a large collection of PC pieces, it may cost you a couple of dollars, but that's still not too bad).

A piece of plastic canvas on its own isn't that impressive though.  There's still nowhere to attach the loose ends, and there's nowhere to write what color the floss is.  This is where tape comes in!  I used masking tape, but I'm sure you could use blue painters tape, a solid color of washi tape, or even colorful duct tape if you were so inclined.  I'm not a big tape person though, so all I had available was regular old masking tape.

When you're done, you'll end up with this: 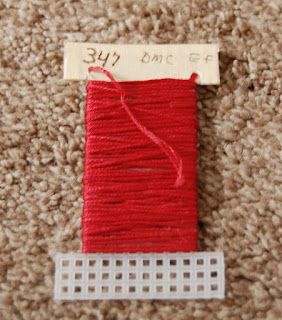 Which I designed to fit perfectly into my Gingham Thread Box.  That way, not only is your floss well organized, but it's stored away neatly as well!

So onto the pattern/tutorial! 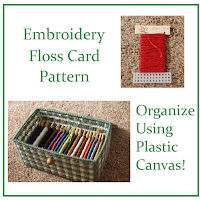 Cut plastic canvas according to graph. 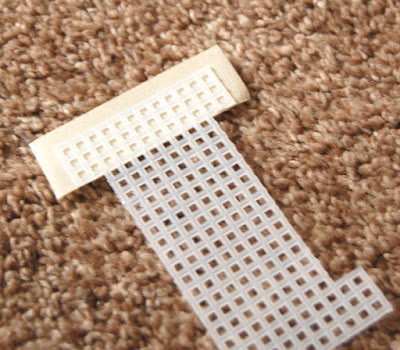 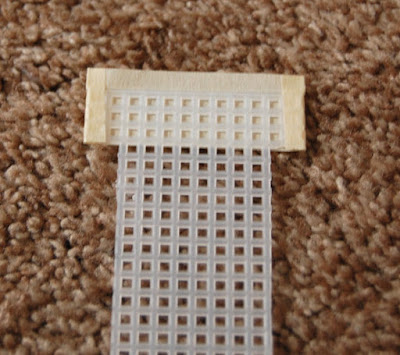 Then fold the top down. 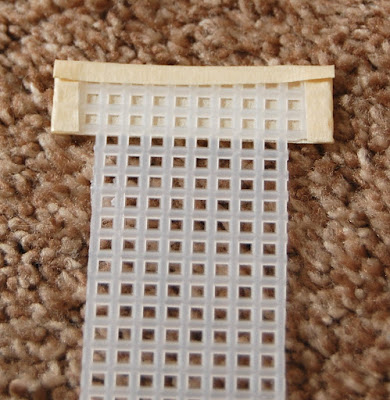 Next, lay another piece of tape on the opposite side of the card (the side with the folded over tape), using the picture below as a guide.  Cut the tape so that none hangs over the sides, but it still hangs over the top. 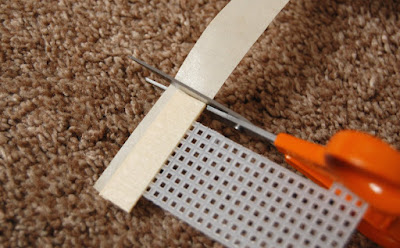 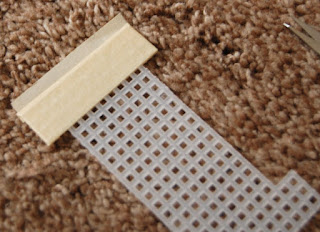 Next, fold the top piece over. 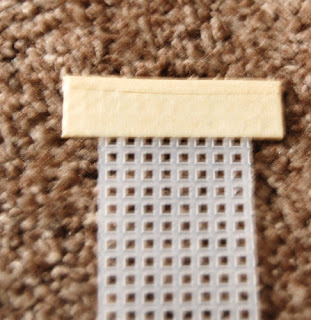 (Sorry for the bad picture).  Turn the card over to the side with no seams and use the marker to write the floss information.  I like to write the number, the company, and I add letters to describe what it is (for instance, EF for embroidery floss, or PC for pearl cotton). 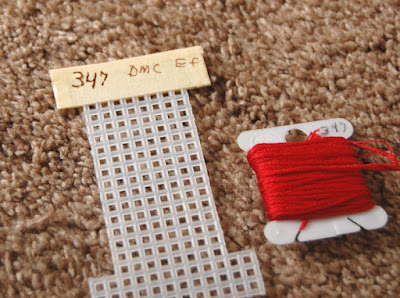 Next, take your scissors and cut a small slit on either side of the taped piece, as shown: 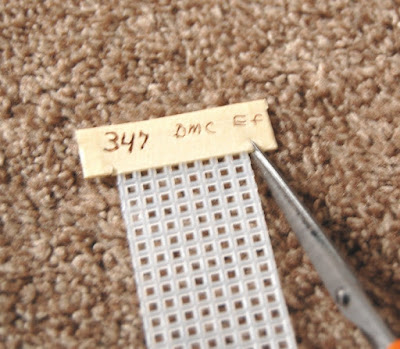 Insert the end of your floss into one of the slits.  Fold the short end down across the center part of the card, and start wrapping the other end around it.  This will keep one end of your floss securely out of the way so it won't unravel from the wrong end. 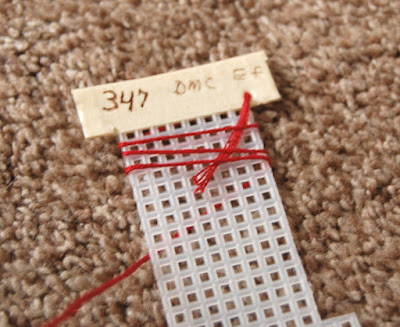 Continue wrapping until the whole piece of floss is on the card.  Insert the end into the other slit. 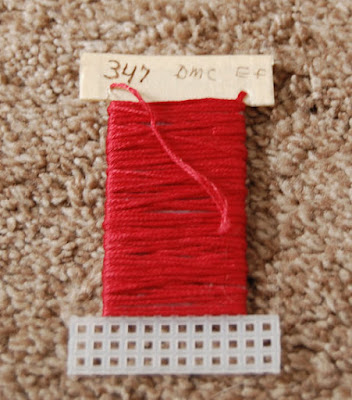 Tada!  Now you have less messy embroidery card that's not very likely to unravel on you.  Next, if you haven't already, make yourself a Gingham Thread Box to store your cards in.  They're designed to fit perfectly into this lovely box. 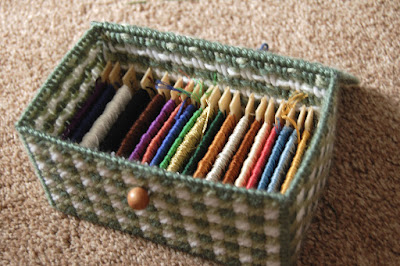 There's a little room left on top, so I stored another dozen or two more cards facing the other way. 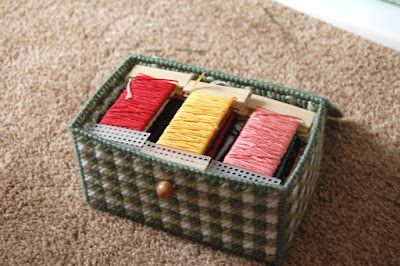 Then just close the box and your floss is perfectly organized and neatly contained! 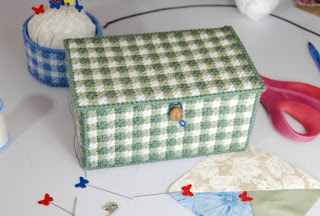 Well, I hope you all enjoyed my tutorial/pattern and I hope it comes in handy for you!  I'll probably end up making several more boxes and lots more cards as I collect more floss, but at least now I know how to keep it well organized so it doesn't become a huge ball of knots!