Hey there, everyone!  How are you doing this chill Tuesday morning?  Did you survive the holiday weekend with your sanity intact?  I hope so!  I managed alright, probably because I knew I could leave the chaos of my family's homes soon and drive back with my loving husband to our quiet home.

This week's tip is another yarn related tip though not necessarily a plastic canvas one.  On my trip to Asheville, NC, I bought two balls of the prettiest purple baby llama yarn, and I just had to make a hat out of it!  I'll be sure to post pictures of it sometime soon, it's so nice.  Well, because it's a high quality yarn, it came as a twisted hank instead of a nice neat skein, which means I had to roll it into a ball before using it.  And then of course I had to knit with a ball of yarn, which is hilarious if you have curious cats around.  Knitting makes the ball roll a little, and then the cats get interested, and before you know it your living room is covered in beautiful, expensive yarn.  Argh!

I thought about getting one of those fancy yarn holders you see on pinterest or Etsy, you know, the ones that look like bowls with a notch or a hole carved into it for the yarn to come out of, but they're usually pretty expensive.  Then, last week I saw something at Joann's that caught my eye. 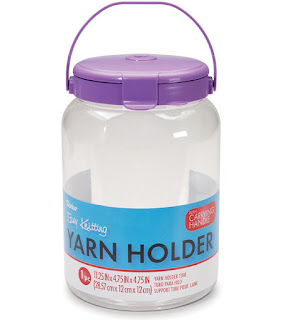 It's a big plastic jar with a lid on top that has a hole.  Huh.  Simple, yet effective.  The problem I had with this one was that it was very light weight, and I just wasn't sure it would do the job of holding the yarn down as I tugged on it.  I could just envision the whole holder rolling all over the living room floor.  (On the plus side, it was only $10.)

But it did give me a good idea for something I could make myself, and I already had all the things I needed to do it!

Being a serious homemaker type who gardens, cans, and ferments, I just happened to have a half dozen half gallon mason jars sitting around my house. 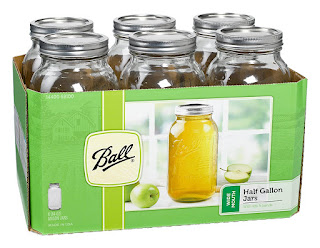 Plus, we're trying to get away from using plastic containers to store our leftovers, and we use mason jars a lot as an alternative.  So we have a bunch of these plastic mason jar lids for storage (is that ironic?). 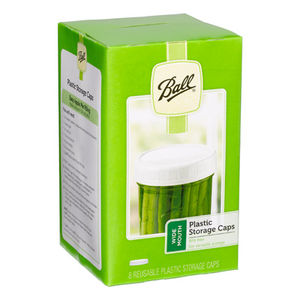 Once you've collected those two or three things, actually making the yarn holder is easy peasy.  Just Get your husband or boyfriend to drill a 1/2 inch hole into the top of the plastic storage lids (or do it yourself; I did!).  Sand it lightly to make sure the yarn won't catch on any rough spots, and you're all set! 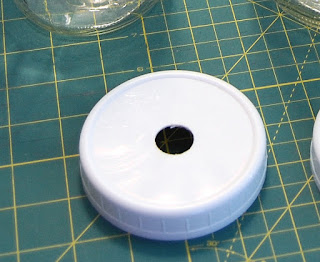 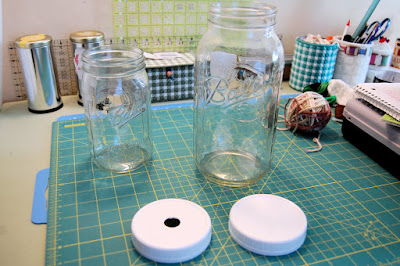 I found that the half gallon jar is perfect for small-medium skeins of yarn and medium sized balls.  The one pictured is a skein of Red Heart Classic; I was also able to get a skein of Red Heart With Love into this jar as well, however a Skein of Red Heart Super Saver wouldn't fit.  Make sure that if you use a skein, the yarn is coming out of the middle, not off the sides. 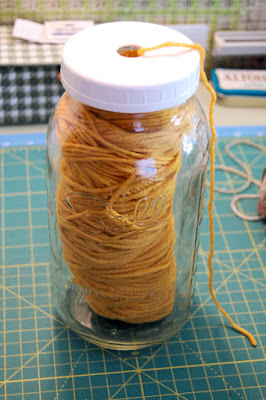 The quart jar is just right for smaller balls and small skeins. 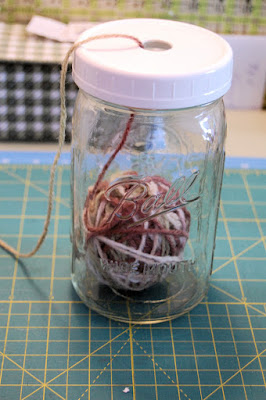 The price break down for the half gallon jars is as follows:

(All prices are from Walmart.com)

Quart jars are cheaper yet, because they come in a case of 12 and are usually cheaper per case.  Or, you could be really cheap and go to Joann's and buy a single jar for a couple of dollars!

Personally, I think having multiple yarn holders around would be very useful, like if the project you're working on uses multiple yarns.  Or, if you're prone to having multiple projects going at once, just stuff your project right into the jar, needles and all, and set it on a shelf.

So what do you guys think?  Do you use a yarn holder?  Or do you just let the yarn ball roll all over creation?  Would you pay $50 for a fancy ceramic holder?  Or are you super cheap like me?

Have a great Tuesday everyone!
Posted by Julie D at 8:00 AM