What's up Wednesday: Catching up with life

Happy November!  Can you believe it's November already?  I really can't.  And not only that, it's like a week into November even.  I need to buy a turkey this weekend!  Holy smokes!  Where on earth is the time going?  I guess that's life though, always moving faster than it looks.  That's why you need to enjoy every day while you have it, because once it's gone it's gone.

Well, now that my life has calmed down some and I'm beginning to settle into the slower pace of indoor life, I thought maybe I should post a life update so you all don't start worrying that I died.  I almost did!  I managed so survive though and now I can tell you the tale.

First, I'll start with garden news.  It was a truly abundant garden year.  I don't know if the surplus production was because of a new fertilizer I used, or the amazing weather, or more likely a mixture of both, but I got so much produce from my garden this summer that I was freezing and canning something almost every single day.  Let me put it this way: I canned well over 300 jars of produce and filled my 7 cf chest freezer (plus my refrigerator freezer) all the way to the very top.  I also have a five gallon bucket of rutabagas hanging out in my attic where it's nice and cold. 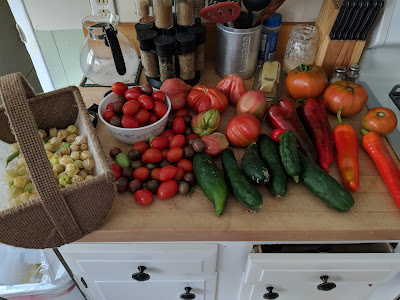 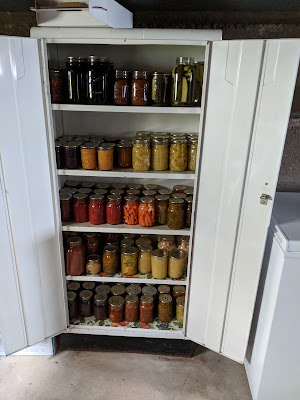 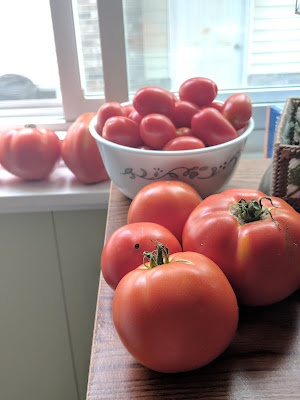 The amazing part about my huge haul of garden veggies is that I didn't even get to pick all of them.  Gallons of tomatoes fell and rotted on the ground, probably close to a gallon of raspberries rotted, and who knows how many ground cherries.  I missed all of that because September was the month from hell for me this year.  Usually September is my very favorite month, but this year will go down as one of the worst.

One of my two kitty babies, Spices, got sick in late August/early September.  She had trouble eating and was clearly in a lot of pain.  We had to cancel all of our plans to be out because she needed to eat very soft food in small frequent doses (because my other kitty Sunshine is a pig and would have eaten it if we just left her a plate of food out).  We got her into the vet and the doctor gave her an antibiotic and told us to bring her back in a week to see if she had improved.  Well, she didn't improve.  He had told us that if she improved, it was likely a rotten tooth and that they would fix her up.  But if she didn't improve, she probably had cancer.  It was so hard to watch her that week eat less and less, and she was clearly in a lot of pain.  So on the following Monday, we called the vet and got her an early appointment because we knew.  She wasn't going to make it.  We did the kindest thing we could do for her and had her put to sleep.  She was around 14 years old and she was well loved. 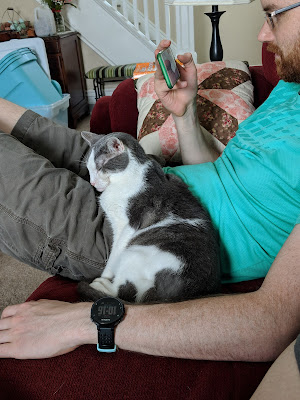 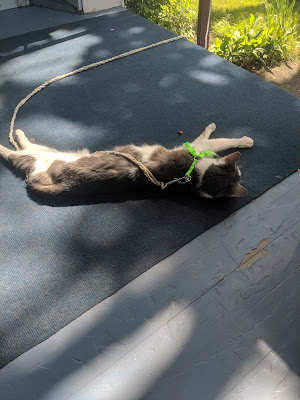 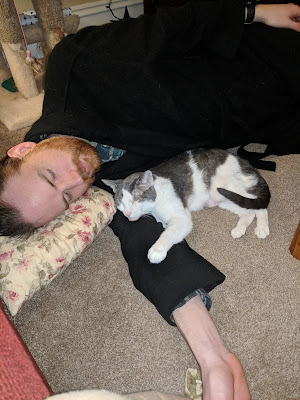 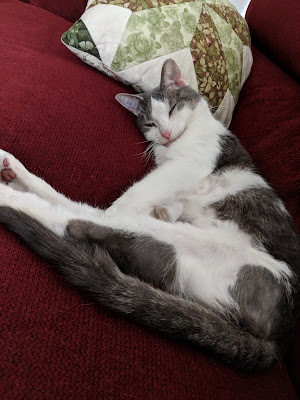 Well, I was a total wreck after we lost her.  She was my hubby's cat through and through.  She loved him to death, would follow him around everywhere, sleep with him every night.  But when he wasn't around, she'd hang out with me and we were buddies.  I miss her.

Have you ever heard that when you're stressed or really sad, your immune system shuts down?  Well I found out how true that is.  A week after losing my kitty, I got salmonella poisoning.  Now I used to think that Salmonella wasn't that bad, just a stomach bug that made you sick for a couple of days.  It turns out that it can be pretty bad.  I was just kind of sick for the first couple of days, but then on the third day, I felt like I was going to die.  I hurt so badly that I didn't want to do anything but lay in bed.  I didn't even get up to brush my teeth at the end of the day.  I couldn't eat anything.  Actually, at that point, I was thinking that death might actually be better than what I was going through.

It took me nearly an entire month to get back to some kind of normal, and I'm still having some tummy issues today.  The culprit turned out to  be... raw milk.  I'm a big proponent of everyone's right to drink raw milk if they want to.  Many states in America make it very hard to get raw milk.  It's actually legal in NY state where I live, but nearly impossible to find.  However, we're right on the border of PA which is much more relaxed about it, so we would go down and get a half gallon once a week.  However, like with all wild and unprocessed foods, there's a risk, and unfortunately I was in a very weak state at the exact time when there was an outbreak of salmonella at the farm.  Will I drink raw milk again?  Maybe.  Have you ever gotten drunk and gotten hung over the next day?  I haven't, but my dear (stupid) husband has, and he tells me that when you're that sick, you never want to touch anything you associate with the sickness again.  He wouldn't drink apple juice for years afterwards, which is what he drank between throwing up, he hasn't touched the brand of beer that he was drinking the night before ever again, and he said he didn't even want to wear the t-shirt he wore that day.  That's kind of how I feel about raw milk right now.  Also raw eggs and raw chicken and spinach and... well I guess salmonella is in everything these days.  Did you hear it was in cake mixes recently?  Yikes.

I did get well enough to enjoy a lovely stay-cation I took with Chad in early October.  We were hoing to be able to enjoy the fall leaves, but it's been an odd year.  The leaves didn't really change color until late last week and they're already off of the trees today.  Anyway, we enjoyed our stay-cation.  We got to see lots of amazing local attractions and got to do a lot of hiking and drives through the country. 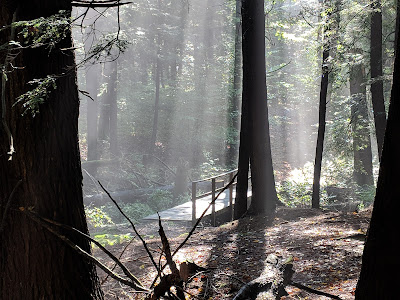 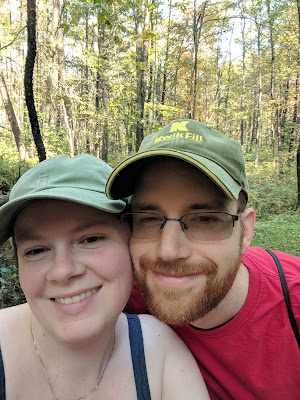 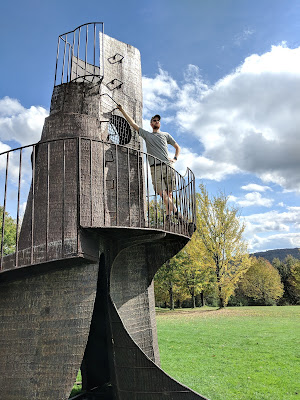 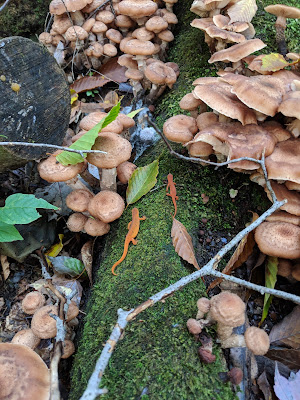 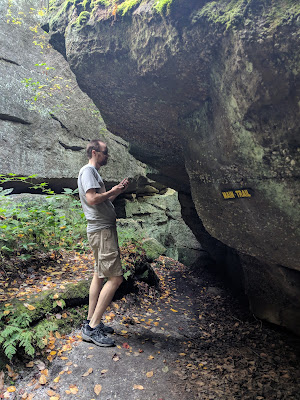 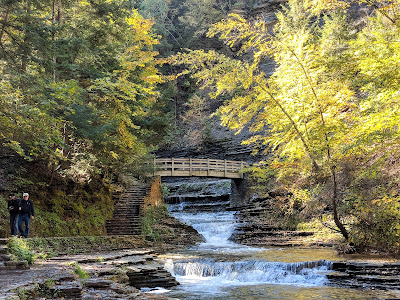 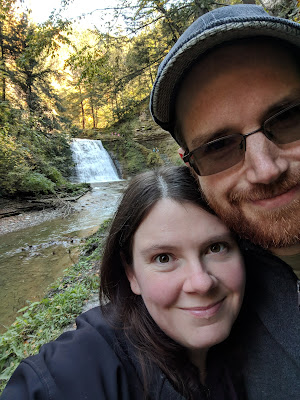 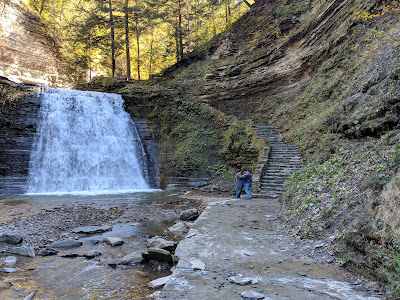 After our stay-cation, we spent a frantic two weeks getting all of the fall to-do list items done, like bringing in the outdoor furniture, winterizing the lawn mower and getting the snowblower ready, and putting the garden to bed.  I've been just mellowing out since then, trying to get myself back into some kind of normal.  I finally feel like I have the time and energy to finally get back to work on my designs!  I'm very excited about that.  It's easy to forget how much joy creative pursuits can bring you because they're the very easiest to cut out when life gets too busy.  Well, it's definitely craft season now!  It's actually predicted to snow several inches next week!  I guess I won't be outside digging in the garden anytime soon.

Well, I guess I technically was digging in it yesterday, planting next year's garlic. 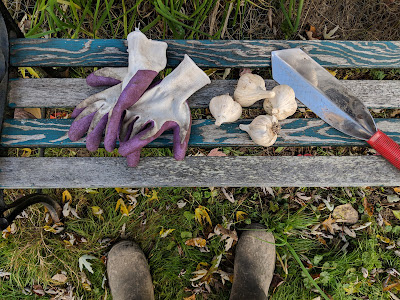 I guess we're all caught up now.  I'm trying to spend a little more time on my designs everyday, and I actually got a new design put up onto my Etsy shop!  I'll post about it tomorrow, I'm sure you'll love it as much as I do.  With the extra free time, I'll probably start posting free Friday patterns again.  As usual, I'm open no requests for ideas!

Have a wonderful Wednesday, everyone!
Posted by Julie D at 11:25 AM

Email ThisBlogThis!Share to TwitterShare to FacebookShare to Pinterest
Labels: life, What's Up Wednesday