Happy Wednesday, everyone!  Actually, happy Valentine's day!  I hope you have a wonderful love filled day :)  My hubs and I don't have anything special planned for today; we kind of didn't get around to making reservations for any fancy restaurants or anything like that, and we ended up exchanging gifts last weekend.  It was nice and quiet, which is how I like my life anyway.

Well, this week's adventure is entirely sewing related!  And I guess technically sewing machine repair related.  So hold onto your hats, it's a fun story.

Last week I was feeling kind of down and sad.  I don't want to say I was depressed exactly because it was a short lived feeling; I was very blue for about a week.  Everyone has their comfort habits when they're sad.  Some people eat junk food, some people play video games, some people shop.  Well, last week what I did was do lots of looking at vintage sewing machines for sale online.  I don't know why I did it exactly.  I have four sewing machines as it is.  I guess in the back of my mind, I have this image of a really cool life I could be living, buying old sewing machines and fixing them up and finding them new homes.  It's not a life I want to live exactly, but it's a place I like to go when real life is getting too stressful.  I also have an fantasy life in my head where I'm a farmer, lol, and one where I'm a perfect 1950s housewife.

Anyway, so I was surfing around on Craigslist and Shopgoodwill and ebay for cool old machines.  I've had my eye on a singer 500A Rocketeer for a long time, and I was really hoping I'd be able to find one for a reasonable price.  Here's what they look like:

How retro cool is that baby?  Not only is it super cool looking, but it's also one of the few all metal sewing machines that do fancy stitches.  Sometimes I fear that my new Pfaff electronic machine won't last very many years because it's got nylon gears and electronic controls.  Even though it's my most expensive machine ($800), it's also the one that's most likely to die first.  So I'm really drawn to a vintage machine that does fancy stitches mechanically, in a way that's unlikely to break down just because it's old.

Well, I didn't find a 500A for sale anywhere, but what I did find was this.

In an add on Facebook marketplace, I saw this picture and immediately recognized it as a Singer 401A!  The 500A and the 401A are basically the same machine, only with different styling.  I've heard some people online say that the 401A is a better machine because it has fewer weak points that can break.  The seller was asking $110 for the machine and cabinet, and it came with all the original attachments.  Hmm...

I had to think about that.  The asking price was decent, but I didn't need a new cabinet.  I thought about asking for just the machine, but then I had a thought.  My mom was using the world's ricketiest table for her sewing machine, so I decided I could give her the cabinet and keep the machine for myself.

It was an hour's drive out to the seller, and they live in a very rural out of the way place.  Hubby and I had a fun country drive at any rate.  I was dubious when I saw the machine in person, though.  It was frozen up completely, needle wouldn't move at all, everything was totally gunked up.  On top of that, the seller wouldn't budge on price.  Hmmm...  When the seller's husband (I think) offered $100, I decided to take it.  If nothing else, it would be a nice cabinet for my mom and a fun project for me to play with.  So we chucked it into the back of our SUV and drove home. 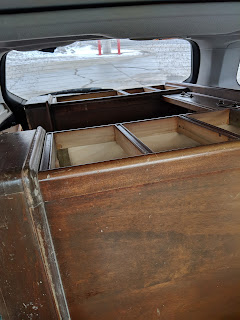 I got to work on the cabinet right away.  I used some Howard's Restor-A-Finish on the whole thing to cover up the numerous scratches, and then used some of Howard's Feed-n-Wax to seal it.  Here's a picture of the desk half way through working on it.  Finished side on the left, unworked side on the right. 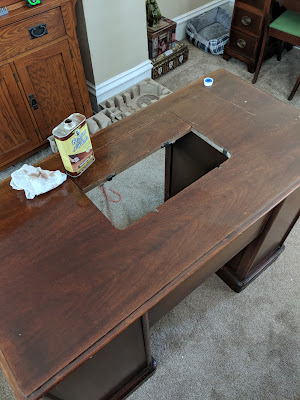 Once that was done, I got to work on the sewing machine.  Ugh!  What a disgusting  mess! 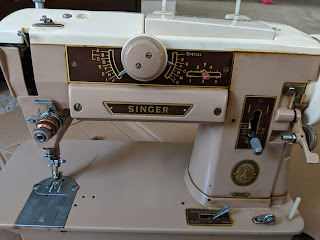 The original owner was clearly a smoker.  The whole thing was covered in nicotine. 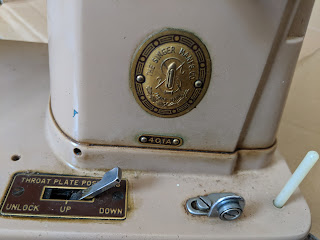 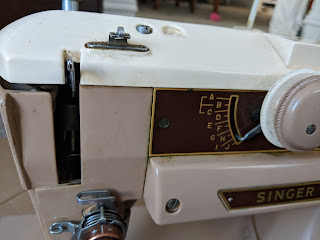 I tipped it over and the feet started disintegrating right away. 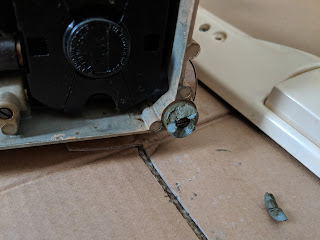 It has no drip pan to cover the bottom, which might explain why I found several buttons in the motor compartment. 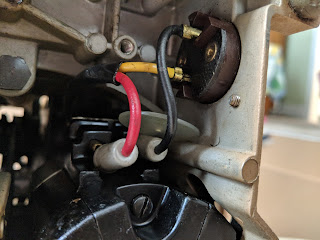 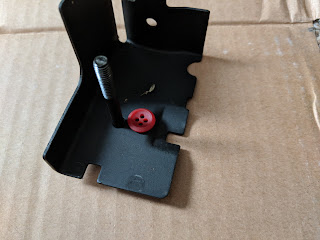 It also looked like she would frequently douse the whole thing in oil, even the gears, which would explain why there was a severely tacky varnish on everything. (Pro tip, don't use oil on gears, only use grease.) 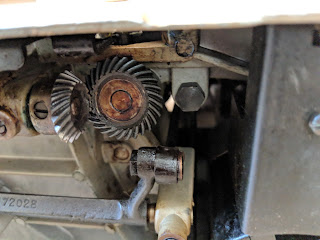 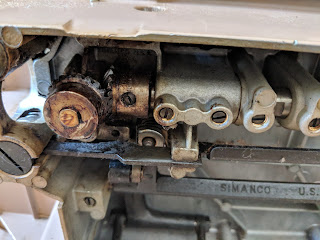 That last picture, that's the problem.  Those gears are supposed to be silver!  This was where the machine was stuck, and after several hours of lubing it up and working it back and forth and not getting anywhere, I gave up and got my heat gun.  It took about five minutes of high heat on these gears to loosen that gunk, and then I had to turn the hand wheel with as much force as I could to get it to start to loosen.  My hand literally hurt the next day.  But I got it loose and it ran smoothly!  This is why I like metal gears, you can beat the crap out of them and you don't have to worry about them breaking.

So after that, I plugged it in to see if it would run.  Well, it did, but it was very slow.  And after about 30 seconds, it began to smoke :(  Not good.  I figured it probably had some oil in the motor.  I tried to get the motor loose, but would you believe that it was stuck too?  Ugh!

By now it was about 5 PM and I needed to get dinner made for when hubby came home, so I decided to put the project aside for the night.  I shot off some questions to the Vintage Singer Yahoo group (a  great group of people, by the way) and put it away.

The next day I got my heat gun again, took off the hand wheel (because the gear on that is not metal), and heated the worm gear of the motor to see if that would loosen it enough to get it to drop down.  I didn't want to heat it too much because there are wires fairly close by and I certainly didn't want to melt anything.  Luckily, it only needed a little heat before it started to move.  Yay!  I took the motor out and started opening it up, and saw this. 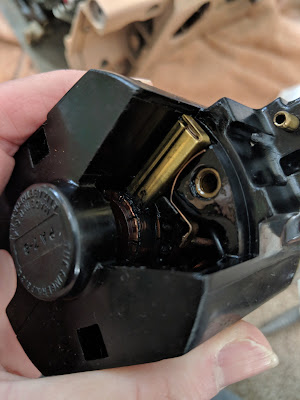 It's a little hard to see, and if you've never seen a small motor it might not mean much to you.  But what's happened is, someone poured oil into the motor and it's gunked up the carbon brushes a lot.  It looked like tar in there, yuck!  My fingers are still black from cleaning all of the gunk out :(  I got it all cleaned up though and put it all back together, and she just purrs now!  What a beautiful machine.

I also spent some time yesterday cleaning her up.  I use Mr. Metal cleaner, which is an ammonia cleaner with some kind of polish in it.  I wouldn't use this on the old black sewing machines because they have a shellac coating, but this machine is enamel and I knew from experience that it would be just fine. 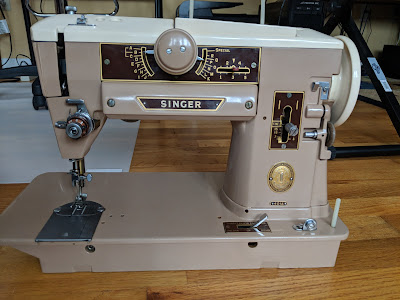 Look at that lovely girl now!  I still have some work to do, mostly cleaning and tweaking the tension assembly, and I also need to get her some new feet and a bobbin winding tire, but otherwise she's good to go!  I don't know if I'll keep her exactly.  I still want a 500A because the styling is just so cool.  I'll probably keep my 401A until I can find a 500A, then compare them side by side, and sell the one I like less.

My hubby was concerned about me buying a new machine.  I mean, with four in the house already, why did I need another.  But last night I bought him up to look at it and show him how all the mechanical parts work.  He's an engineer, so he was just totally captivated.  The fact that you can open it up and visually see what makes the patterns is cool beyond words for people like us.  Now he understands why I wanted it, and thinks it's a cool find too.  Maybe someday I'll get him into the action :)

In other news, I've also been sewing!  I finished the strip tube quilt last week.  I don't have a picture of it finished, but here it as while I'm basting it. 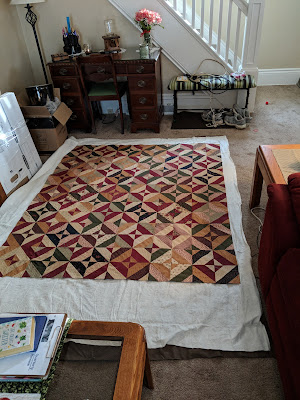 It's very pretty!  I love the rustic colors.  It matches my decor super well, because I'm trying to go for kind of rustic country type thing.  Not exactly shabby chic, but similar.

I used up the last of my garden carrots in a delicious butternut squash soup.  Garden carrots are so different from store bought carrots.  You know how a garden tomato has so much more flavor than anything you can buy in a store?  Well, the same is true for garden carrots too.  They have a robustness, a depth to their flavor that's missing from store carrots.  Le sigh.  I guess I'll just have to do without until next season's crop. 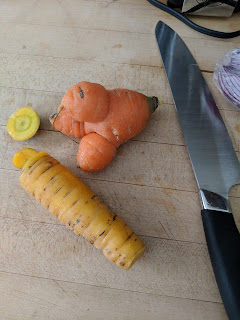 The good new is that I still have lots of rutabagas, though.  They're my secret ingredient in stews because they add such a lovely sweetness.  It's amazing to me that Americans don't cook with them more often, considering how delicious they are and how easy they are to grow. 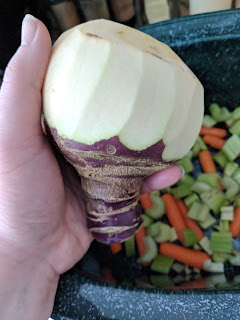 Well, I guess that's all for this week, everyone.  I hope your Valentine's day is a good one!  I'll finish this post with one more picture that I hope makes you smile today. 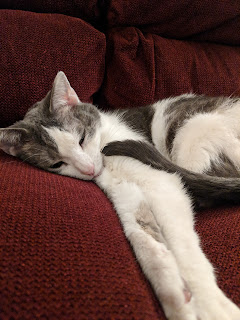