Happy Tuesday morning, everyone!  It's so beautiful here today, with lots of bright sunshine and wide open blue skies.  I love the room my computer is in; it's the only room in the house with an actual view out the windows.  Most of the windows in the house face the side of the neighbors' houses, which isn't exactly fun to look at :P  But this room has trees and sky and yard!  Which also means it's bright and cheer on a sunny day like today, yay!

If you follow my blog at all, you may remember that I once talked about my favorite scissors to use with plastic canvas.  Back then, I used a pair of iris scissors which are technically surgical scissors and are really good with turning tight corners and snipping close to the edge of things.

However, over time I have found that they're not perfect.  There are a lot of things I don't like about iris scissors, the first being that the finger holes are very small and can be uncomfortable.  They also have a smooth edge so if you're cutting something harder, like ultra stiff plastic canvas, they tend to slip a lot.  The biggest problem I had with them, though, is the fact that they will eventually lose their edge.  This is true of all scissors, of course, but the problem with iris scissors is that they have a very high angled edge compared to other scissors.  I think this is to make them sharper and more razor like, which you would want with surgical scissors of course, but what it means for a crafter is that you can't easily sharpen them once they lose their edge.  I tried using a scissor sharpener but that actually just made them a lot more dull.  I also tried sharpening them with a metal file, but it was very hard to get the right angle, so I eventually gave up and ended up throwing them away.

I could have gone out to buy another pair of iris scissors.  They're not expensive, after all; most pharmacies have them for under $10.  However, I don't like the idea of buying something designed to be thrown away.  I try to create as little waste as possible in my life because I care about the environment, so I decided to do a little research and see if I could find a really good pair of scissors that would continue working for me for a long time.

I ended up with a very cool set of scissors!  I liked the first pair I bought so much that I bought multiple sizes for all of my crafting projects. 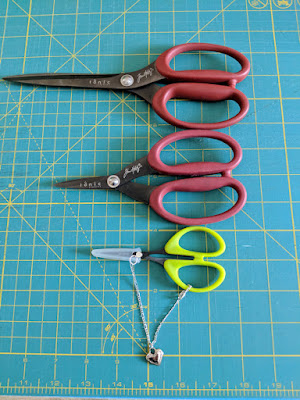 They're titanium non-stick micro-serrated scissors and they come in several sizes.  They also come in several brands.  I've seen three or four brands that are essentially the same scissor with a different name slapped on them (for instance, the bottom green pair is a different brand as the top two pairs, but they're the same style).  I see these all the time in quilt magazines and quilt shops.  DO NOT BUY THEM THERE.  They are outrageously expensive if you buy them that way!  I paid $25 for the tiny pain on the bottom, and only $25 for the other two pairs combined!

If you're interested, Amazon has the red Tonic Studios scissors for a very reasonable price.  You can get all three pairs for about $35 right now.  That's not an affiliate link, I don't make any money from this post.  I bought all the scissors with my own money and I love them.

What's really cool about them is that they have these tiny tiny serrations that grip anything you're cutting.  You know how sometimes you try to cut something with a traditional pair of scissors and it slips out as you cut?  I hate that!  But that never happens with these scissors. 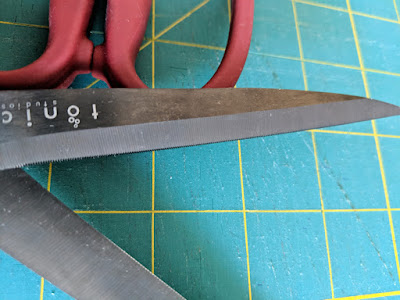 It's hard to see, but if you click on that picture above, you can see the tiny serration.  Because they're serrated, it means you can't sharpen them; however, they're made of titanium which is very hard and will stay sharp for a very long time.  I've been using mine on yarn and plastic canvas and fabric for about a year and they're still as sharp as they were when they were new.

The three sizes I have are 9.5", 7", and 5".  The 9.5" one is perfect for big fabric jobs, like cutting excess batting and backing off of a quilt before I add a binding.  Like I said, it grips the fabric so you can be sure your cuts will be straight.  The 7" one is great for small fabric jobs, like cutting half square triangles and trimming dog ears and such, but it's also the perfect size for cutting ultra stiff plastic canvas.  The blades are a little chunky, but the handles are big so you can put more force into the cut.

The little 5" scissors are perfect for tiny sewing jobs like cutting threads off your finished piece and snipping tiny corners, but I love them for working on plastic canvas.  They cut corners super well because their blades are so small and very very sharp. 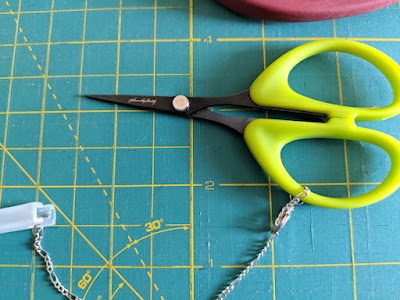 They all come with a blade cover, but this is the only pair I kept the cover for because they're needle sharp.  I also bought a little connector chain so I don't lose the cover.  It was $5 at the quilt shop I  bought these scissors from, but you could just as easily make it if you have any jewelry making experience.

Some serious words of warning here: these scissors can do some serious damage.  Because they grip so well, if you get your finger in there, it will cut you!  Normal smooth scissors will pinch you or maybe break the skin a little, but these things are like little saws and will seriously hurt you bad, so be super careful.  That also applies to any projects you're working on.  With normal scissors, if you get extra fabric into the blades, say a fold in the fabric that you didn't see and part of the project you don't want to cut, you'll probably get some resistance that will clue you into the fact that you're cutting the wrong thing.  Not with these.  Shoom!  It just cuts right through everything.  I very recently cut through too much fabric and ruined a perfectly good quilt back.  I had to do some clever patchwork to fix the piece :(

The only other complaint I have about these scissors is that, for whatever reason, they don't cut soft floppy materials very well.  I have to have another pair of scissors handy when I'm stitching plastic canvas because they don't cut yarn very well?  It's very strange.  But that's life.  Nothing is every perfect in every way!

That's all for today, everyone.  I hope you're having a lovely week so far!
Posted by Julie D at 10:09 AM