Happy Tuesday, everyone!  Today's tip probably won't be useful to everyone, but I thought I'd put it out there anyway because I thought it might help at least some people.  I'll be talking about my photo setup that I use for my Etsy shop, and what I use to get good shots of my designs.

Now I realize that I don't take the best photos.  I have trouble getting the right lighting a lot of the time because my house is very dark inside, and maybe I'm impatient with the arrangement of props and such, but I think my pictures do a good job of illustrating what I'm selling, and in the end that's important.  You need a photo that's well lit, has good color, and is nice and crisp.

I have two cameras, but I only use the one for my product pictures.  It's a Nikon D40 DSLR. 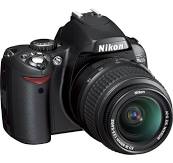 This is actually pretty old by digital camera standards.  I bought it for my hubs as a wedding present, and we got married in 2007!  Yep, 10 years this year!  It was $400 when we bought it, but if you want this camera, you can find it used for $160.  Nikon still makes entry level DSLR cameras though.  Looks like you can get a Nikon D3400 with a zoom lens for $499.  Of course, you probably already have a smart phone, and most of those are equipped with decent cameras these days. I'm a control freak though, and like to have more control over my photo than most smart phones let you have.  Not to mention I don't have a smart phone!

Since I don't have very good lighting in my home, I use a photo light box.  These are pretty simple devices, and you can actually make one yourself if you want to.  It's simply a square frame with white cloth on all but one side.  You put your item you want to photograph into the box and shine light through the cloth into the box.  This makes it so the light is soft and diffuse with few shadows.

This is the one I have.  I got it on Amazon for $30 and it came with four different colored backgrounds (red, blue, black, and white).  I got a 32 inch one because sometimes I make a big project and I knew I would need the extra space to photograph it.  What's great about this one is that it pops open, and when you're done it just folds back up and takes up very little space. 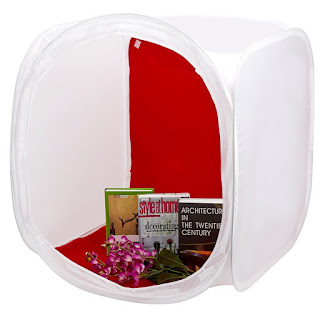 Unfortunately it looks like it's unavailable, but here's the product page with all the info.  Maybe you can use the info to find one like it that you like.

The next thing you need for a photo light box is of course lights.  I went and bought four inexpensive clamp style work lights at Homedepot. 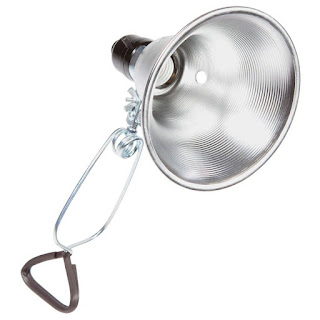 While there, I also bought a 4 pack of 100w equivalent of LED bulbs to go into the lamps. 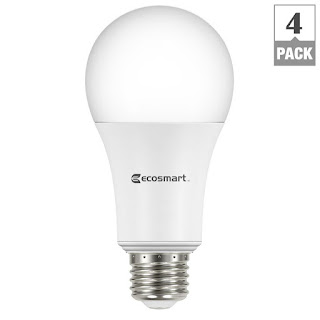 I wanted LED because A) they don't use very much electricity despite being very bright, and B) they're made of plastic so I don't have to worry about breaking any glass.  They work really well.

I attach all the lamps to a 4 outlet adapter, plug that into an extension cord, and then plug that into the wall I'm working closest to.  Pop open the photo light box and put in the white background.  Then position the lamps so that there's one on either side (I clip one to a box and one to a chair), one on top facing down, and one in the front facing in.  Here's what it looks like. 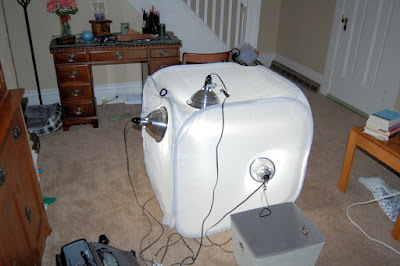 My photo light box also has a front cover with a small slit in it for your camera.  That way more light stays in the box, and you can put a light in the front too.

Here's the other side. 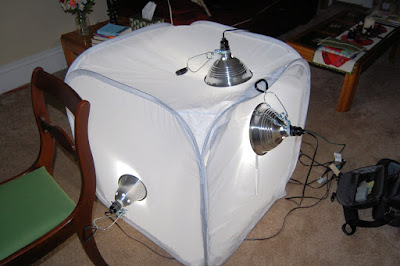 And here's a peek into the camera slit. 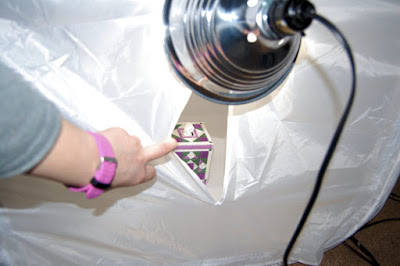 And when I'm done, it all folds back up and fits neatly into my craft room. 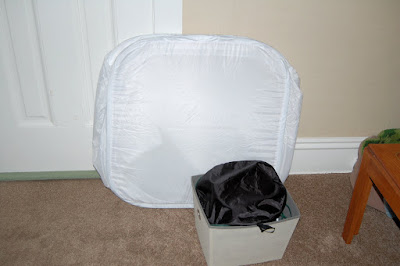 Of course, even with this setup, the pictures don't come out perfect.  I need to go in later and work with the photos to correct the colors and lighten the background.  What I use for my photo editing is a program I've been working with for almost 20 (!) years, Correl Paint Shop Pro. 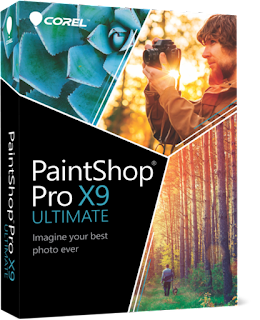 It's usually pretty reasonably priced.  It's normally $100, but you can frequently find it for $50 or less.  If you don't want to pay for a photo editing program, there are free ones, the most popular being a program called Gimp.

Here's a picture of my latest project straight off the camera card. 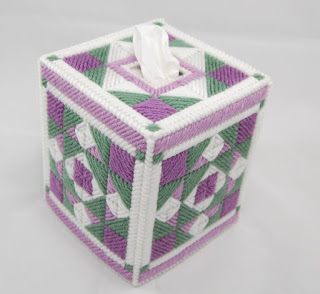 And here's the edited version of the same photo. 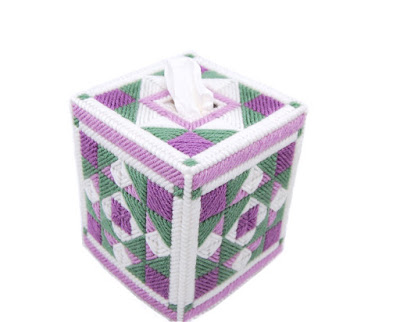 It does take some practice to get photo editing right.  Even thought I've been a digital artist since 1999, it still took me several months of trial and error to get my photos to start looking the way I want them to.

So there's my photo set up from start to finish!  I hope that helps someone out there with their business.  Photos of your product are the most important part of your listing, and when you're trying to represent something that you put a lot of love into, it's worth the time to put time and effort into the photos too.