Happy Wednesday, everyone!  Are you enjoying September?  It's my absolute favorite month, and it's just starting to get really pretty out.  It was so cold the last two weeks, we finally had to turn the heat on (!) last weekend.  Thankfully it's warmer this week and I can actually open the windows again!  I don't know how long that will last, though.  The remnants of hurricane Irma look like they're coming our way.  We got blasted by the tail end of Harvey too, so it's been pretty rainy here so far this month.

What's up with sewing:

I haven't gotten a lot of sewing done lately.  I've really wanted to, but I feel way too busy to actually sit down and get to sewing.  I have several quilts I'd like to work on, including an xmas present for my hubby and a wall hanging for my mom.  I also just bought a bunch of Jersey knit to make myself some cold weather tops!  So I need to get started on something soon.

I do, however, have an announcement to make.  I've added a member to my family. 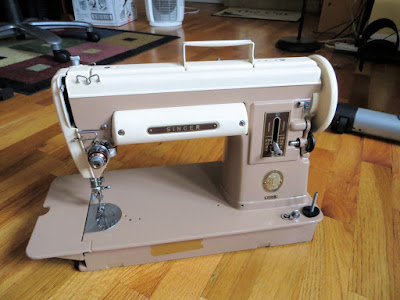 My mom heard about my new vintage sewing machine and she said she'd really like one too because she can't figure out how to use her more modern sewing machine.  Well, I thought maybe I'd go over and figure it out for her and then give her some lessons.  However, I got over there and discovered her machine is pretty bad.  It's the noisiest sewing machine I've ever seen, plus the most complicated to thread.

So I though, oh, why not, I'll see if I can get her a vintage 301A like I bought myself.  And when I saw that beauty on ShopGoodwill.com, I snapped it up!  I got it for $60!  I went cheap because some fool who posted it on the website took a picture of the back of the machine, and didn't mention what model it was.  I knew right away it was a 301A because I've been looking at them so much lately.  I would have paid a lot more for it if it was easier to tell what model it was.  But that's ok!  I don't mind cheap.  I think I'll keep the two toned one and give the solid colored one to my mom.

Because I'm weird, I took a family photo. 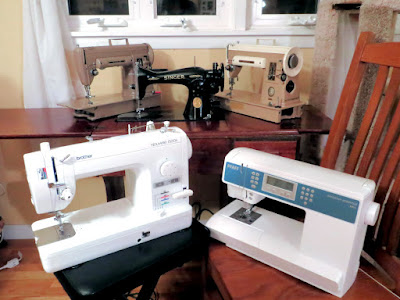 Speaking of sewing machines, I told my sister she could have my mom's old sewing machine if she wants it.  She said she couldn't figure out how to use the machine either, and that she'd rather have one of those hand held sewing machines.  I was a little appalled.  I've heard those things are really junky.  However, I'm trying not to judge other people!  I went on Amazon and got her a little hand held Singer for xmas.  This one was rater a little higher than the others.  It's kind of cute, too.  That's a pint jar next to it for scale. 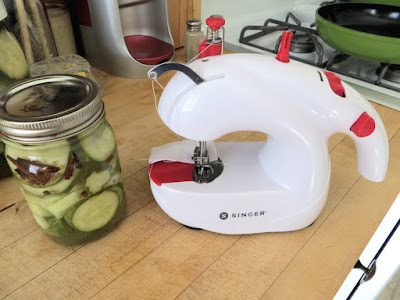 It's ridiculously loud and a little unwieldy, but I'm sure she'll like it.  Plus, it was less than $20!

What's up with the garden:

Well, the garden is winding down.  Try as I might to grow fall vegetables, the slugs always eat them to the ground.  Literally, they eat entire plants all the way to the ground in the fall.  Out of 64 pea plants I planted, only about 8 have made it, and let's not talk about the kale annihilation.  I should just give up trying.  However, the cucumbers are still churning out little beauties, and I finally decided to do something about them before they all rotted. 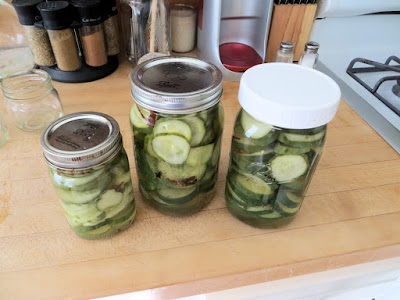 Refrigerator pickles!  I don't follow a recipe.  I just mix a good amount of equal parts water and white vinegar, add enough sugar and salt to make it taste good, then add in a broken cinnamon stick, whole cloves, coriander and dill seeds, and peppercorns.  Bring to a boil and simmer for 5 minutes, then pour over cucumber slices.  Yum!

What's up with stitching:

I've started a new project!  I decided I need to do something for Thanksgiving.  It's a really hard holiday to create for because it's one of very few holidays that have been commercialized and it really doesn't have many symbols or icons.  The one thing that really stands out for Thanksgiving is the turkey! 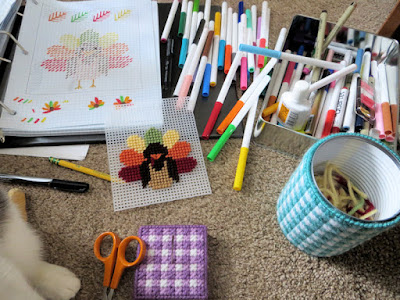 So I'm working on a turkey TBC.  Cute, right?  TBCs are pretty easy to create, so I hope to have the pattern up by next week. 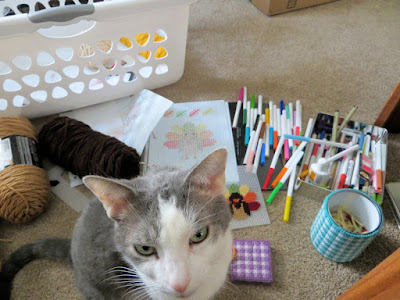 Spices was not amused when I made her move.

Well, that's all for this week.  I hope you're all having a great Wednesday and have a good rest of the week!
Posted by Julie D at 1:12 PM